About Henk ten Have

Henk ten Have was born in Voorschoten, the Netherlands in June 1951. After completing his secondary school (Gymnasium alfa) in May 1969 he started studying medicine at the University of Leiden and was awarded the Medical Degree in April 1976. In 1978 and 1979 Ten Have worked as a physician in the municipal health services (GG&GD) in the city of Rotterdam. In June 1982, Henk ten Have was appointed as part-time Instructor at the State University of Limburg in Maastricht, the Netherlands. In January 1983 he was awarded the PhD degree in philosophy at the University of Leiden. In July 1985 he was appointed professor in philosophy at the State University of Limburg. In September 1991 Henk ten Have moved to the Catholic University of Nijmegen (now Radboud University Nijmegen) where he has been appointed as full professor of medical ethics in the School of Medical Sciences. He became involved in many public debates as well as expert committees in the area of healthcare ethics and healthcare policies. He was also appointed as member of the newly founded Central Committee on Research involving Human Subjects (CCMO) in the Netherlands (1999-2003), and served in the Ethical Issues Review Panel of WADA (World Anti-Doping Agency) (2006-2008).

In September 2003, Ten Have moved to UNESCO (United Nations Educational, Scientific and Cultural Organization) in Paris as Director of the Division of Ethics of Science and Technology. Shortly after he had arrived, the member states invited the Director-General to explore the possibility of developing a universal declaration of global bioethical principles. Under his guidance, the International Bioethics Committee drafted the text and carried out consultations in many countries and with various stakeholders. The Universal Declaration on Bioethics and Human Rights was unanimously adopted by all member states of UNESCO on 19 October 2005. Since then, Ten Have has set up several UNESCO programs to implement the Declaration, such as the Ethics Education program, the Global Ethics Observatory, and the National Bioethics Committees program.

In 2005, he was elected as Correspondent Member of the Koninklijke Nederlandse Academie van Wetenschappen (KNAW-Royal Dutch Academy of Sciences). In 2008, he was awarded the Ethos Prize in Bioethics, sponsored by the Calouste Gulbenkian Foundation in Lisbon, Portugal. In the same year he received an honorary degree of the Medical University of Pleven in Bulgaria. Retiring from UNESCO in 2010, Henk ten Have started in July 2010 as Director of the Center for Healthcare Ethics at Duquesne University in Pittsburgh, U.S.A.. In 2015, he was appointed as ‘Lifetime Honorary Member’ of the Bangladesh Bioethics Society, and in 2017 as Corresponding Member of the Pontifical Academy for Life in Vatican City. He retired as Director at Duquesne University in July 2018, , where he now is Emeritus Professor since 2019. In 2021 he was appointed as Research Professor at the Faculty of Bioethics of Anahuac University in Mexico, where he is teaching in the MA Global Bioethics program. 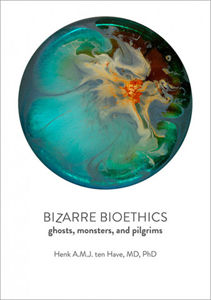 Discussions of ethical problems in health care too often concentrate on exceptional cases. Bioethical controversies triggered by experimental drugs, gene-edited babies, or life extension are understandably fascinating: they showcase the power of medical science and technology while addressing anxieties concerning health, disease, suffering, and death. However, the focus on rare individual cases in the media spotlight turns attention away from more pressing ethical issues that impact global populations, such as access to health care, safe food and water, and the prevention of emerging infectious diseases. In Bizarre Bioethics, Henk A.M.J. ten Have argues that this focus on bizarre cases leads to bizarre bioethics with a narrow agenda for ethical debate.

The International Association for Education in Ethics (IAEE) had its 10th international conference in Padua, Italy, 22-24 June, 2022. Henk ten Have was invited to make a plenary presentation ‘Training in ethics education: a global perspective.’ For more information about IAEE, see: www.ethicsassocation.net. 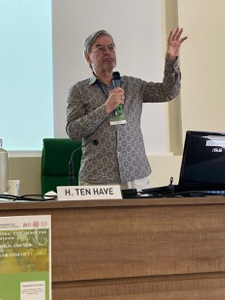 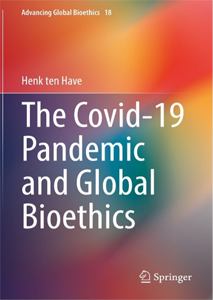 This book demonstrates that the COVID 19 pandemic asks for a a global approach to bioethics. it describes how the pandemic affects the experience of being in a world that is intrinsically characterized by global connectivity. It demonstrates that a moral vision is necessary to articulate this experience of connectedness. Subsequently, a perspective of global bioethics is introduced, which provides a broader framework than mainstream bioethics, since it highlights the significance of both vulnerability and solidarity. Through a unique global perspective the book addresses the moral challenges of the pandemic, and places the confrontation with death, disease and disability within a wider framework of ethical concerns. This book is of important in the public debate on infectious diseases, and of relevance to health professionals, global health educators, public health experts, as well as policy makers.